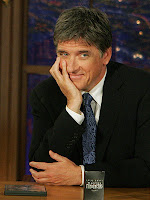 Craig Ferguson is making me fat.

For the past two years I've got up every morning, checked my email, fed the cat and headed to the gym for cardio before breakfast. And I've managed to keep my weight down to a nearly acceptable level (my trainer in fact says I should gain weight, only this time as muscle.) And true, it's not about the digital number that greets me every morning on the scale. (I do not weight myself after breakfast or during the day, as from experience that only ends in tears. You always weigh more in the afternoon than you do in the morning.) as your weight fluctuates over the course of a day and certainly over the course of several days. But it doesn’t necessarily mean anything.

For the last year I've had no satellite tv service, I just couldn't afford the $75 a month. So my tvs sat untended, and more or less because tables to set books and clothes on. A few months ago I had a client who, long story short, ended up hooking up basic cable for me. So now I have basic tv. But I've found that the tvs still sit idle. I watched Glee and Lost on hulu.com I don't have HBO and have found no place to watch True Blood online (which sucks) (sucks, get it?)

(Here is a picture of my favorite naked vampire, Alexander Skarsgard) 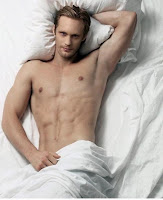 but I do like to watch a little tv, usually Jay Leno when I go to bed, I watch his monologue and depending on who the guests are and how tired I am, I might keep watching, tucked in bed with the remote in hand, ready to turn off the moment I get depressed by the endless anti depressant commercials.

Have you noticed that one where even if you're on anti depressants they want you to take their even more anti depressant? Like we don't all have more than enough pill bottles in our medicine cabinets.

That said, I am taking antidepressants. I tried a few years ago but the one I was taking made my hyper. And I got a lot done during the day but couldn't sleep at night. So I had to take sleeping pills to sleep. This is no way to live, so I gave them all up cold turkey and never looked back.

But earlier this year, with the divorce, the closing of the gallery, the loss of a couple close friends, the economy, the financial situation.... I just felt like I was drowning in mud, and I decided to try again. I am taking a different one, and taking half a pill a day, and it's quite wonderful. I have one minor sexual side effect, but it's ok because I'm generally in such a good mood I don't care.

So one night I was up late and Jay had someone on i can't stand (probably either Tracy Morgan or Chris Rock or maybe one of the Kadashians sisters) and I switched over to letterman. Who I rarely if ever watch, I find him so obnoxious. I'm sure he's quite lovely in person, but for me the whole schtick has never worked for me.

Then Craig Ferguson came on and I was captivated. All along I had assumed he was just another late late talk show host and aren't they all the same? but no.

Craig actually made me laugh out loud. Which (see above) is a very good thing. and unusual. especially for tv. Plus he's cute! And very sexy. So I find myself lingering before going to bed at my usual 11:30 or 12 and waiting until 12:30 to watch Craig. The first few minutes are essential, the part before the opening monologue, just seconds after the Letterman logo fades. He is so funny! And he says so much with just his eyes. it's amazing the subtlety. Especially on television. Especially on my small 17 incher in the bedroom…

I usually am too tired to stay up for the whole show. But sometimes he has great guests. most of whom seem to have no idea what is going on. Craig’s interview style might be described, in gentle terms, as haphazard. Craig's style is, hmm... acerbic and laid back. Some of his guests look like animals caught in a trap. A couple of them have seemed downright hostile. I’ve even seen a couple of them get up and walk away!

Gentlemen of the court permission to treat the guest as hostile.

the problem is, when I don't get to sleep until 1 or 1:30 I have a real hard time getting up at 7:30 or 8. and if I don't get up by 8am I have a hard time getting everything done in time to make the breakfast special at eat well, which ends abruptly at 10:30. For many years I've had breakfast every day at eat well, so much that I don't even have to order, they automatically bring me what I want. I'm not sure if you would describe that as stuck in a rut and predictable, or merely consistent. I like it because I don't have to think about what I'm going to eat and I don't have to negotiate onions and cream sauce and wheat etc in my food. I get the perfect breakfast at eat well every day for $6 which is awesome. 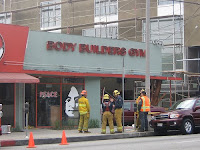 So when I don't get up in time, I am running late and I often have to reduce my time on the cardio machine or sometimes even skip it all together. Which has been causing my weight to slowly inch upwards. which makes me very unhappy.

not enough to counteract the antidepressants but still.

so my options are: stop watching Craig. the one part of my day that I am guaranteed to laugh. and how lovely to go to sleep having had a good laugh.

If I had satellite service I could record him on tivo. but I don't. I could record him on VHS (like, totally!) and I could watch last nights' episode at 11:30 when I need to go to bed. I could also zip through the antidepressant commercials, which even though I am on one, make me feel like I am still not taking enough drugs.

But then I'm watching yesterday's show. and honestly I'm not sure it's worth the effort and coordination. 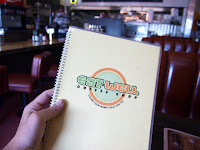 the second alternative is to not worry about the breakfast special at eat well. it's not like they stop serving breakfast at 10:30, it just goes up by $1. so that's not much money, but I am worried about losing the discipline of my day. If I don't HAVE to be there by 10:30 (or hopefully earlier) it could easily turn into 11:30 or 12 and then it would be lunch time and I would have skipped breakfast, which I don't want to do. Usually I don't even eat lunch. and sometimes I don't even eat dinner. so breakfast is important to me. I also try to eat a big (healthy) breakfast, medium lunch and small dinner. it seems to work.

(this is me working out at the gym, my trainer took this with his new G4 iPhone)

If I could do cardio later in the day that might work, at least I'd still be doing it, But I know my schedule and that’s highly unlikely to happen. I try to make it back to the gym in the afternoon to work out. Sometimes if I've missed cardio in the morning I will do a stint before or after working out, but now that I'm back with my trainer he is pushing me and I usually don't have the energy.

so. at the moment it's a dilemma. laughter and late nights, weighing 5 lbs more than I want to, or early sleep and early cardio to be skinny and fabulous...

remember, nothing tastes as good as skinny feels…