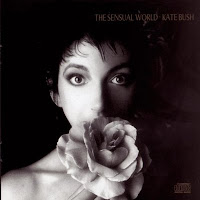 That summer I had given up my life (and home, and job) in Vancouver for a fantasy relationship with someone I thought I loved, someone who said he loved me, someone who happened to live in Los Angeles. I had moved here a few months into the year, to be with Jeff; the Cyndi Lauper song, "I Drove All Night" was current, and I had literally 'drove all night' to get to LA, in my white Honda CRX hatchback. I arrived, and the man I had crossed the border and several states to be with, stood on the sidewalk while I was unloading my car, and said, "I'm not going to change my life at all for you, I think that's sensible." And then he went out to dinner with his friends.

I was devastated. Not exactly the reaction I had been hoping for. Not the way the Cyndi Lauper song turns out either.

But what could I do. I'd packed up everything and moved to Los Angeles, knowing only one person, who, literally within minutes of my arrival had basically dismissed me.

So I stayed, living in his tiny light brown shaded bedroom, sleeping next to him on a twin bed, feeling neither wanted nor desired, or even particularly welcome, let alone appreciated, but having no other place to go.

This was before internet. I scoured the LA Times Classified section for any work that I was qualified for, or at least willing to do. It seemed everything was filled before I even got the morning paper. This was before cel phones and blackberries and, of course I didn't have a personal computer, let a lone a laptop. Not like today, when our world grinds to a halt if even one of these pieces goes out. I photo-copied my resume on expensive paper at the local copy shop, and mailed them out to P.O. boxes in 9x12 envelopes. I had to be prudent, because each resume I sent out cost me literally $1.

The budget was tight. I was here illegally and living off my unemployment insurance from Canada (which eventually turned into a somewhat uncomfortable situation with the Canadian authorities). So on the job application forms, where it asks, "Are you entitled to legally work in the USA" I diligently and honestly checked "no". Imagine how far up the ladder my resume climbed.

My relationship with Jeff grew more uncomfortable as time went by. I had no money to do anything; Jeff was living comfortably with an established job at a major bank. Having lived here his whole life, he had seemingly hundreds of friends; I had none. I watched soap operas in the afternoons while fruitlessly looking for jobs in the newspapers.

I got a couple freelance art jobs, through pure happenstance, from people who either felt sorry for me, or wanted to take advantage of me, or, possibly both, that I worked on in Jeff's apartment while he was at work, and had to have everything spotless and back in place before he got home every night at 5:30. Which was a challenge, and thankless. Every now and then I would accidentally get paint on something, which would turn into a calamity.

So in the evenings, I usually went out on my bike, which was my freedom. My favorite time of day, too, when the sky is still light but the sun is going down, setting over the ocean in Santa Monica. I walked a lot too, something that anyone who has been in LA for any length of time simply does not do (see Missing Persons "Walking in L.A."). But you learn your way around, and you stumble onto things you would never notice passing by in a car. Every now and then I would find money on the ground. One time I found a ticket to the MTV music awards, literally lying on the sidewalk. That was amazing; I got to see The Cure, Madonna, Paula Abdul, Bon Jovi, Def Leppard and more.

I went to every free event I could find. I spent my evenings at bars and book stores and men's groups. I didn't have sex with anyone, I didn't go anywhere that I had to pay to get in, I didn't know anyone and didn't have any place to go. I just stayed out until the shops closed and I knew Jeff would be asleep. One afternoon my bike was stolen; I had locked it to a parking pole, the thieves literally ripped the pole out of the ground and slid my bike off the end. It was devastating.

Eventually I realized that I couldn't do this any more, it was too hard.

It was nearing Halloween, 1989. I had an old college friend, Scott, who was going to school in Dallas, Texas, and I used my Mom's credit card (ONLY for emergencies) and bought a plane ticket. They have this huge event for Halloween called "Razzle Dazzle Dallas" where they close the streets off and all the clubs are decorated in Halloween themes; it's a huge gay street fair. I rented a wonderful knave costume from a shop on Hollywood Blvd (again, with Mom's credit card); Halloween that year was in the middle of the week so the big celebration was actually held a few days before, on the weekend previous. I had a great adventure in Dallas.

I came back to LA because I had bought a ticket to see Stevie Nicks at the Greek Theatre, which was just a few days before Halloween (Oct 26th). I can't imagine where I got the money for the ticket (hah). But I had to go, I had been a huge Fleetwood Mac fan since 1976, and had never seen a solo Stevie Nicks concert. 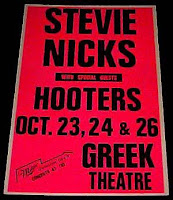 It was outdoors, at the Greek Theatre, it was dark, I went alone, and it was COLD. It was the end of October.

But it was a thrill to see the show, Stevie in all her drugged out glory, performing all the hits and fan favorites, while being pelted with flowers and teddy bears, and the seventeen minute version of "Edge of Seventeen". Added to the melancholy of knowing I was about to leave this amazing city and head back to dreary old Canada. it was called, "The Other Side of the Mirror Tour", which was glaringly prophetic.

The morning after the concert, I went to Aron's Records on Melrose, and bought the new Kate Bush album ('The Sensual World') which had just been released. I bought it on CD of course, and I also bought it on cassette. At that time we didn't have cd players in our cars, not even a portable cd player and adapter. It was either buy the (plebian) cassette to listen to on the way home, or buy the cd to LOOK AT all the way home. So I bought both.

I packed my car, and my bike rack (sans bike, but getting a replacement bike was high on the list of priorities), and my new Kate Bush album(s), and hit the 5 freeway, 22 hours north to arrive back in Vancouver. So I listened to the cassette several dozen times, a gorgeous and lush album filled with sadness and beauty. Driving north, watching the seasons change from seemingly eternal summer in Los Angeles, to colorful brisk fall in the Pacific NorthWest, to cold and damp early winter in Vancouver.

Where I had one friend, Stephen, who against all odds had been my friend for several years. I had met Stephen in the summer of 1987, I had just graduated film school and was interning at a tv station in Burnaby, BC doing graphics for the local news. Stephen had just finished college in Philadelphia and had moved to Vancouver to hang out his music therapy shingle. We met in my favorite nightclub called the Gandy Dancer, and sort of dated for a bit but ended up solid friends instead. I've known him now for 22 years and he's like the slightly older brother one sees in tv shows like Brothers and Sisters. I think he will always be there.

At the time, he was living in a studio apartment in the Kitsilano side of Vancouver. He said I could stay with him for two weeks, and he wisely kept to that. Within two weeks of arriving in Vancouver I had a marketing/graphics job with the Burnaby Arts Council, a part time job as a clerk at Sam the Record Man downtown, and was sharing a house with a straight guy a few blocks from the ocean. I had also met a new guy I was infatuated with, whose name also happened to be Jeff.

I had spent Halloween in Dallas, Texas, a few days later saw Stevie Nicks in concert at the world famous Greek Theatre in Los Angeles, and somehow still made it home to Vancouver in time for Halloween proper. One amazing week!

Living in Vancouver didn't last too long this time, soon I was working full time doing all the advertising and display material for Sam the Record Man, and they promoted me to head office in Toronto. Miserable in Toronto, I only lasted a few months and drove across America, back to Los Angeles, where I have been ever since...

Posted by RocketManLA at 11:55 PM No comments: