I went to a screening of 'Crazy Heart' tonight in Hollywood, followed by a Q&A with Jeff Bridges; it was GREAT. Jeff Bridges was amazing in the movie. VERY similar to the Wrestler, in story and performance and type of movie. Except this one is about an alcoholic faded country singer, modeled after Merle Haggard (according to the director) but looking astonishingly like Kris Kristofferson and/or Waylon Jennings. Jeff Bridges does his own singing. He should definitely be nominated, his performance is utterly devastating. Maggie Gyllenhaal was also at the Q&A, as well as the director and writer. 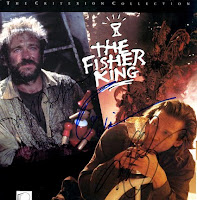 Jeff signed my Fisher King laserdisc (previously signed by Robin Williams and Terry Gilliam). Click on the small picture to see a larger version, note: Terry signed on Jeff's face. Robin signed in the middle. Jeff looked at it and, after consideration, signed on Robin.

The movie has a 92% rating on Rotten Tomatoes.

The Princess and the Frog, a must see

A Single Man, I attended a screening a couple weeks ago, Q&A with director Tom Ford, I can't wait to see it again. The oscar race for me is between Colin Firth, Jeff Bridges and Joseph Gordon-Levitt (from 500 Days of Summer).

The Lovely Bones, which I'm only 2/3 of the way through the book so must finish before I see the movie. The movie can't possibly be as engaging as the book (are they ever?)


They are screening the new movie 'Uncertainty' on Friday and Saturday at 7:30 at the Fairfax theatre. Joseph Gordon-Levitt is doing a Q&A after. I want to try and get his autograph on my 500 Days of Summer poster (my favorite movie of the year) but I'm also interested in the new movie.