As fate would have it: the intersection of five random people on the Hyperion Bridge, and the death of my SUV.

As fate would have it: the intersection of five or more random (?) people on the Hyperion Bridge, high above the 5 freeway at 10:20 am last morning, in the first October rain.

I awoke at the usual time, with no trepidation whatsoever. Not even a tiny clue from the universe that this day would be anything out of the ordinary. Meditated a bit, fed the cat and the fish, had a shower and set out. It was raining, but lightly, I made sure everything was covered in tarps before I headed over to the gym for cardio, all seemed copacetic. I left the gym at 10:20, carefully calculating just enough time to get to Eat Well for the breakfast special, which ends at 10:30. 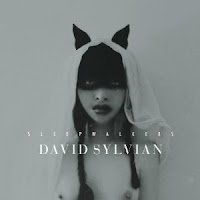 I hit the brakes, but not too hard, because I knew the pavement would be slippery, especially on the bridge. It was just barely raining, and it hasn't really rained here for many many months, so the oil on the road would be treacherous; imagine a very slippery frozen pond, then covered in oil.

The silver car spun around in the middle of the road, and then someone coming from the other direction hit the sports car. Suddenly the sports car was heading back towards me, but coming at me sideways. I ramped to the left, but then I started to slide. I could see the side of the silver car coming towards me, in slow motion, like in some action movie, but by this time I had no control and the right side of my truck slammed into the left side of the silver car with a tremendous crunch, the sound of glass hitting steel, and losing. 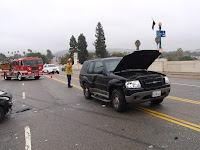 Of course, all this happened in literally a fraction of a second. 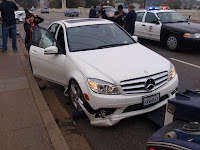 I hadn't been going very fast, but it was all quite a shock. Not to mention the actual physical jolt of being hit by not one but two cars in rapid succession. Sideways.

My truck sputtered and stalled. My head reeled. 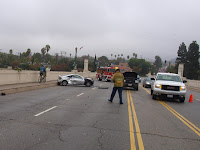 I quickly got out and I could see the driver of the silver sports car was slumped over in the passenger seat of his car. The side windows had blown out, and the front fender of his car was torn off and lying on the road. There was glass and car parts all over the pavement and sidewalk, and the cars on the bridge had all stopped. There was also two other cars who managed to avoid crashing into anyone, but we were all askew on the road, with parts and plastic and glass all over the pace, as if god had shaken the road and we all just kind of landed where we landed. 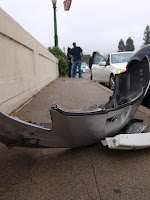 I went over to the silver car to make sure the guy was ok, he was smashed into his car and the door wouldn't open, but he nodded he was ok but his leg hurt. Meanwhile the driver of the second car came over and he said he’d called 911. I told the guy in the silver car not to move, help was coming. He sat in his car for quite a while until the firemen arrived and pulled him out. 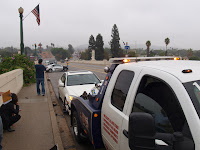 A firetruck arrived and two young firemen got out and went around asking if everyone was ok. They got the guy out of the silver car and he sat on the side of the road with his head in his hands. We were all basically ok, obviously a little shaken (more than a little shaken) but our vehicles had definitely seen better days. 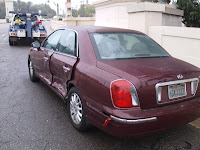 I got back into my truck which was now facing the wrong way, in the wrong lane and effectively in the middle of the road. The engine turned over but it wouldn't stay running. I popped the hood and everything looked ok, but after several tries to get it running, I gave up. 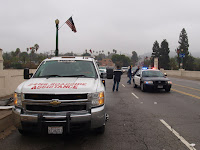 My first call was to my auto body shop, and I asked if they could send a tow truck, which he dispatched right away. Everyone else was by this time out of their cars and on their phones calling various agencies and family members. It's so amazing that every single one of us had a cel phone. 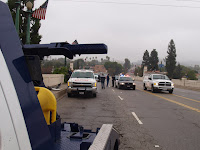 A few minutes later my tow truck arrived. The driver tried to start my truck, but it wouldn't stay running. So they pushed it out of the middle of the road so the traffic could get past. Then the police man arrived and stopped in the middle of the road, so once again both west bound lanes were blocked.

The police man said none of us could leave until he had taken statements from everyone. So my tow truck driver had to stand there waiting. 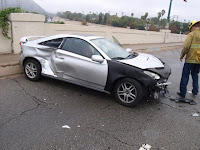 Meanwhile, one of the people had called AAA, their tow truck driver clearly had been through this a few times, and he calmly collected everyone's insurance info, drivers license and registration, and began making photo copies (!!) in the back of his truck. 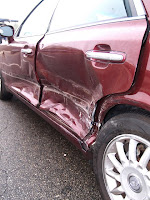 So the cop took statements from everyone and when he was finished with me he said, "Ok, you can go." The driver of the silver sports car was pretty much in shock, and wasn't saying much. Also his car was clearly totalled. He showed me his insurance and it was bare bones. So he had lost his car, and was clearly at fault in an accident involving 5 people (there were two people in one of the cars) and 4 vehicles including a 2010 Mercedes. 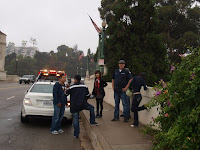 The damage to my truck is pretty intense, on the passenger side, and of course it's not running. Also the door on the driver’s side doesn't open very well, and the sport panel fell off.

It is now sitting in my local auto body shop, waiting for the insurance inspector to come and look, which will hopefully happen soon, so they can start restoring my truck. But the mechanic told me they will probably write my truck off; because of the way the crash happened, the front end of my truck is twisted. 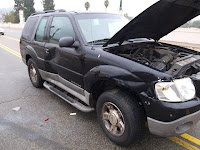 So clearly I had to rent a car. I was expressing concern over this at the auto body, and they said, "hey, there was just a guy here who is from a car rental place, his card is right there on the bulletin board."

So they called him, and a half hour later he arrived to pick me up. He said, "sorry it took me so long to get here, there was some sort of accident on the Hyperion bridge and they had it closed off."

We all laughed. “Ooops!” 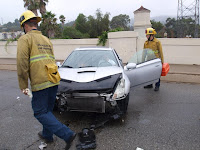 The tow truck had gone back to pick up the totaled silver sports car, which was facing the wrong was in the oncoming lane. I imagine they had to close the bridge to get the car and all the debris taken care of. 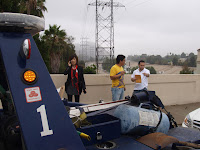 So I got a rental car, and then headed over to my insurance company, who I had already called a couple times. Since the drive is underinsured, I am responsible for payments to repair my truck and the rental car. Or, if they write it off, I will have to buy a new truck!

Then the insurance company will reimburse me, minus my $1000 deductible, and I will have to submit the rental car bill to the silver sports cars insurance company. The insurance agent said they will recover what they can from the sports car driver, but it will not cover all the cars and people involved. So that kind of sucks. 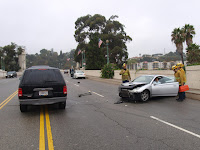 I am often bemused by the hands of fate, or coincidence. Some people say there is no such thing as coincidence, and everything happens for a reason. A Course in Miracles (or at least Marianne Williamson) says every person (or car?) who is in front of you (or beside you, or behind you) is an opportunity to learn, and it is our choice to learn through love or through fear. I crossed paths with a lot of people yesterday. The three drivers of the other cars, the tow truck driver, the policeman, the firemen, the mechanics, the car rental guy, two insurance people plus one on the phone. 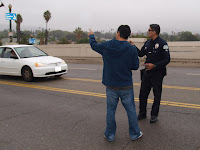 And these things took up nearly my entire day. I was talking with the insurance agents at 5pm as they were closing, setting up a time for them to see the damage on my truck. I went to the gym and then to a movie; I was just too beat to attempt any work.

I took a warm bath when I got home from the movie, I knew I would be sore when I woke up and thought the heat might lessen the damage. I sat there looking up at the ceiling, wondering what the lessons here were for me, and if I negotiated the day as well as I could have. And how in the world I am going to be able to buy a new truck!

I thought, as I often do, one minute (or even thirty seconds) earlier or later either way, heading across the Hyperion bridge, my day would have been entirely different. And my truck would be safely sitting in my driveway when I woke up the next morning.

I wonder what this is all about?

Email ThisBlogThis!Share to TwitterShare to FacebookShare to Pinterest
Labels: car accident, course in miracles, driving in the rain, fate