33 years ago: I saw the first night of the ABBA Voulez Vous tour

It was the summer of 1979, for my 16th birthday my Dad bought me my first car, a powder blue 1966 Ford Fairlane.  The stereo I installed in it cost more than the car.  The stereo ROCKED. The ABBA single, 'Does Your Mother Know,' came out a few weeks before the Voulez-Vous album, and was my favorite song in a year of favorite songs.  I played the 45 over and over, dreaming that Benny (who I had a crush on) was singing it to me (I know, Bjorn sings it, but I didn't know that then).  I loved the album.  I played it endlessly.  Every song was great (and still is).  For many many years I named "Voulez Vous" as my favorite ABBA album.  The radio station started playing 'Summer Night City" and it went Number One, and it hadn't even been officially released. Then they announced the tour was opening in my city (Edmonton, Alberta, Canada) and the hysteria was unbelievable.  It was all over the radio and newspapers.  People literally came from all over the world.  It was so exciting.  ABBA was front page news (these newspaper scans are the original newspaper articles I have saved all these years).  The tickets were $12.50.   Today those tickets would easily be $250 face value.


Note: Click on the photos to make them larger)

This photo was on the front page of the Edmonton Sun the day after the show. It was printed in red as shown. 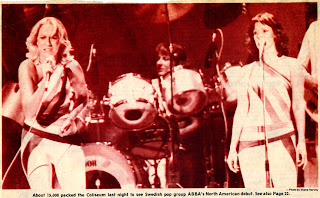 This was on the front page of the entertainment section of the Edmonton Journal when ABBA arrived in town for rehearsals.  Sept 11, 1979 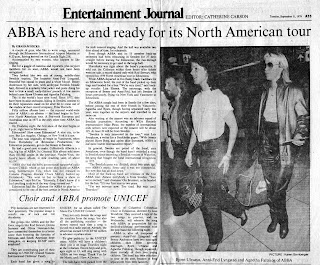 Interestingly enough, when I was scanning the page, I noticed on the back an ad for ABBA the Movie; this was at a repertory theatre that played "art films." 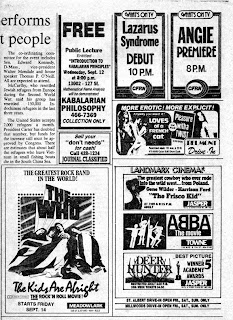 And this is the review from the Edmonton Sun, Friday Sept 14, 1979.  sorry the bottom is torn off. 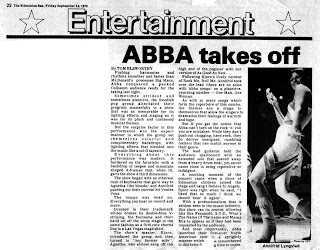 The only thing I remember about it was the opening ROAR, when the lights went down in the Coliseum, was unbelievable; I've never heard anything like it before or since.  The whole place literally shook.   My friend and I didn't have very good seats so I couldn't really see anything, but I do remember the stage show, the backdrops of the Polar mountains, and the light up ABBA logo.  I bought the program at the time, but have long since lost it.

31 years is more than a lifetime for some people.  Think about all that has happened, all the people who were born, married, divorced, died. All the places I lived, all the people I loved.  It's mind-boggling. It
makes me really sad, and really happy at the same time.

Posted by RocketManLA at 4:13 PM 3 comments: