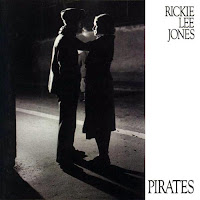 The other day my friend was helping me clean out the closet in the back of my house. It's behind my dishwasher and washer and dryer so it's fairly difficult (nearly impossible) to get to. Since I don't have enough wall space to display any of them, I had stored my framed autographed posters there since I moved in.

(click on any small picture to see a larger version) 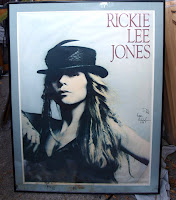 It is an extremely rare poster, and even Rickie herself, when I showed it to her, said, I wish I had a copy of this. I briefly considered giving it to her, but the moment passed. Particularly because by then, she had already dedicated it to me.

Then I got it framed. This was before I was a professional photographer, I do my own framing now. At the time it cost over $200 to get the poster matted and framed. It was a lot of money, but it was worth it. I've loved that poster from the moment I got it. Even before it was signed and framed, I've had it up in every home I've lived in for the last thirty years. I think it's the only poster I've had for that long. I haven't had many other things for that long, come to think of it…

As I pulled it out of the closet, and was saying, ‘this is my all time favorite poster’... to my horror, I realized that the bottom of the frame was mildewed and moldy. “Oh no!” But much worse, the mold had gone inside the picture and the poster was also molded at the bottom. 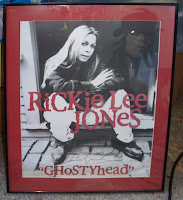 I then remembered that I also have two other Rickie Lee Jones posters framed, and I pulled them out, and they are also molded at the bottom. So in one fell swoop all three of my favorite posters were found dead.

Phideaux said, ‘well, maybe it's time to let go of these. they are only things, after all’.


I guess the universe can make decisions for you, some of which you might not necessarily agree with or feel particularly exuberant about.

Phideaux and I finished sorting the closet (no other posters had been harmed) and we decided to walk down the street to the Coffee Table restaurant, which is one block from my house. At the Coffee Table, you order your food at the front and when it's ready they bring it you out in the restaurant. I go there enough that I don't need to look at a menu. Phideaux was studying the menu when I tapped him on the shoulder.

"You're not going to believe this but Rickie Lee Jones is standing right over there."

Sure enough, less than 15 feet from us, the one and only Rickie Lee Jones was getting a glass of water. OhMyGod.

What does THIS mean?


Phideaux and I ordered our food and went to sit on the patio while they kitchen prepared lunch for us. We sat about ten feet from Rickie and her friend, who were deeply involved in conversation. I know Phideaux purposely positioned it so that Rickie was in my eyesight for the entire meal 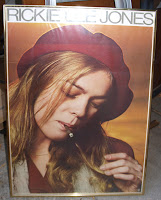 I've been a fan of Rickie Lee Jones since 1979, when her first album was released and I must have listened to it a thousand times, and a thousand more times since. I've seen her in concert at least 25 times, more than anyone else. I've met her several times over the years. But would she remember me? Doubtful. My experience is that celebrities, when you are meeting them or requesting an autograph or photo, their eyes sort of glaze over and there's an invisible and unyeilding wall that comes down between you. Also most of the time when meeting a rock star, it is backstage before or after a concert so the lighting is not so great. And they are either focusing on the upcoming show or trying to unwind from putting on a performance. I don't think most rocks stars really engage with their fans, and I don't blame them.

So she, oblivious to the fact that I am probably her biggest fan, sitting less than ten feet from her while she eats her lunch on the patio at the coffee table. Watching every bite, but trying not to.

But I didn't say anything, and Phideaux and I ate our lunch and left, Rickie and her friend still talking to each other. No one else talked to either of them during the time I was there.

Phideaux and I are always looking for cosmic significance. Small (or large) hints from the universe. We mulled this over while we ate. But I don't think we came to a conclusion.

When I told my friend Colleen about this, she said, ‘maybe the lesson is to take better care of the things that mean a lot to you. like, why was this poster in the back of the closet? it should have been hanging on the wall, where it would have been safe and enjoyed.” This is true. And I seriously regret it. It's just that wall space in my house is minimal. And that is because it is mostly taken up by media (cds, records, dvds, and books).

Perhaps another lesson here, as Phideaux (and that hoarding expert guy on Oprah) would be the first to assert, is that my "stuff" is crowding me out of my own home, and keeping the few things that really mean something to me relegated to the back of closets where they can become water damaged. 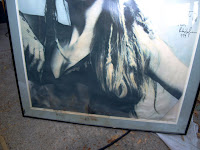 A few days later I told my therapist the story and he said, ‘I would have gone up to her and told her the story, it's a fascinating story! I'm sure she would have liked to hear it.’

Well, this may be true, or it may not be true. Having worked in the music business for 25 years I have met many many famous people. As a rule I do not ever interrupt someone while they are eating. That, to me is taboo. Had she been sitting there by herself, waiting for her food to arrive, I probably would have approached her.

With caution. Because you never know how famous people are going to respond. Some famous people have been incredibly rude to me (no names mentioned Keanu Reeves, Paul Simon, Marianne Faithfull). Although Rickie Lee Jones is probably not very famous, and likely doesn't get recognized very much.

And the several times I have met her or talked to her she has always been very cordial. 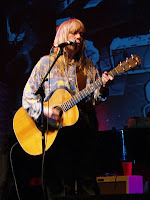 A couple ago, Rickie played five Mondays in a row at a local silverlake club, I went to four of the shows and took photos at three of them. I wrote to her through her management, and asked if I could send her the pictures, but never heard back. I also suggested to her that we do a photo shoot several times, but heard nothing. I imagine famous people and/or rock stars are constantly bombarded with such offers and it's hard to know which are legitimate. Also I think as a rule, people like that don't like to work with fans. Although in this case I happen to be an excellent and creative photographer and would love to work with Rickie, and I'm positive we could create some amazing photos of her. She is a very charismatic person and I feel most of her photos do not do her justice. In my experience this means she has not been working with the right photographer.

The promo poster from the ‘Pirates’ album is a stunning photograph, and it is the exception. Which is why I love it so much and have carried it with me all over the place. For thirty years.

That and, I absolutely love the album, and what it represents. That was a great time in my life (just after high school, and coming out). It means a lot to me. And it is a wonderful album in itself. 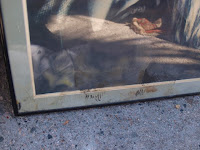 I am studying the poster to see if I can somehow crop the damaged part off and have it reframed. Even though every time I looked at it (hanging in a significant and safe place) I would see the missing part like a wounded soldier feels the itch In his phantom missing arm...

And, of course, eternally searching for cosmic significance...